Top 10 Most Corrupt Politicians of the World 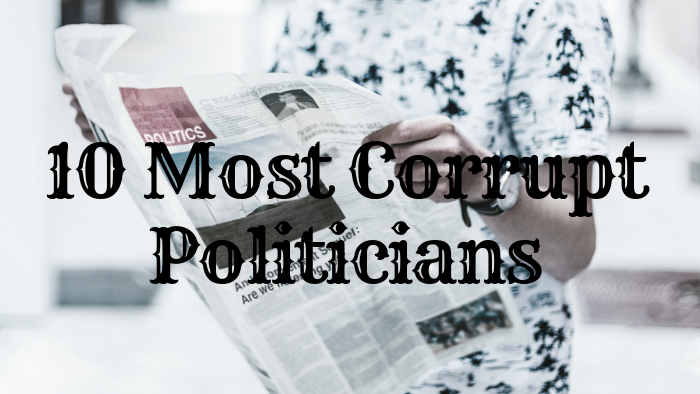 Corruption is defined as inducements of wrong doing through unlawful means mostly by people in power such as Government Officials and Police Officers.

According to a report most of the Government Officials such as Prime Ministers, Presidents, and Cabinet Ministers etc. are more likely to get involved in corruption because of their access to country resources.

The corrupt politicians enjoy various privileges and dodge authorized bodies and break the trust of their people.

Here is a list of top 10 most corrupt politicians of the world as of 2018, who have ruled their countries by unfair means and for their own personal gains. Jayalalithaa (24th February 1948 – 5th December 2016) was an Indian politician and film actor who served five terms as the Chief Minister of Tamil Nadu for over fourteen years between 1991 and 2016.

Jayalalithaa is the number 10 of the 10 most corrupt politicians and she was put to trial for allegedly amassing unaccounted wealth. Supreme Court labelled her corruption case as “deep rooted conspiratorial design”.

Some of the allegations involved spending on her foster son’s lavish marriage in 1996 and her acquisition of properties worth more than ₹66.65 crore

(equivalent to ₹259 crore or US$38 million in 2017), as well as jewelry, cash deposits, investments and a fleet of luxury cars.

She died before the Supreme Court of India reviewed the case in 2017. North Korea has amassed a huge amount of Nuclear Missiles including Hydrogen bombs under the leadership of Kim Jong un.

Jong un is also believed to have conducted various purges and executions including his own uncle Jang Song Thaek and his entire family for treachery.

Although there is no record and explanation of corruption but he is believed to be one of the most corrupt and dangerous politicians of the world. Teodoro Obiang Nguema Mbasogo (5 June 1942) is an Equatoguinean politician who has been President of Equatorial Guinea since 1979.

Being the leader of one of the poorest states of the world, he is one of the richest people of the world. His estimated personal wealth is about $600 Million more than America’s President’s wealth ($11.8 Million).

Teodoro is widely accused of corruption and abuse of power. He has been given a three-year suspended jail term by a French court for plundering public money from his oil-rich but impoverished west African state to fund a jet-set lifestyle in Paris. Petro Poroshenko (26 September 1965) is the fifth and current President of Ukraine in office since 2014.

He has built a huge lucrative asset base since and before his tenure.

Petro’s name came up in the infamous Panama papers but his lawyers repeatedly deny that none of his offshore companies set up in the British Virgin Islands (BVI),

Cyprus and Netherlands have bank accounts or conduct any financial activities.

Poroshenko has various corruption charges against him which makes him one of the most corrupt politicians of the world. David William Donald Cameron (born 9 October 1966) is a British politician who served as Prime Minister of the United Kingdom from 2010 to 2016 and Leader of the Conservative Party from 2005 to 2016.

Cameron has been criticized by figures on both the left and right, and has been accused of political opportunism and elitism.

David Cameron recently admitted that he profited from his father’s Panama offshore property.

He is said to have paid income tax on the dividends but there was no capital gains tax payable. He is also involved in a recent FIFA corruption case as well. Khalifa Bin Zayed Al Nahyan (7 September 1948) is a Emirati royal politician who is the current President of the United Arab Emirates, the Emir of Abu Dhabi and the Supreme Commander of the Union Defence Force.

Sheikh Khalifa is also chairman of Abu Dhabi Investment Authority, which manages $875 billion in assets, the largest amount managed by a nation’s head of state in the world.

Collectively, the Al Nahyan family is believed to hold a fortune of $150 billion. Khalifa is also named in the tax haven leak of the Panama papers.

His and his family’s offshore companies and their lack of explanation about them have landed him on number 5 in the list of top 10 most corrupt politicians of the world.

Sigmundur Davíð Gunnlaugsson (12 March 1975) is an Icelandic politician who was the youngest serving Prime Minister of Iceland from May 2013 until April 2016.

Following the release of the Panama Papers, he announced on 5 April 2016 that he would step aside from the office of Prime Minister.

According to Panama papers, his offshore company holds nearly $4 Million in bonds in the three major Icelandic Banks.

His attempts at dodging the authorities and embezzlement of funds make him one of the most corrupt politicians of the world. The king of Saudi Arabia is also involved in the Panama case with many offshore companies and scandals.

His offshore companies and shares include Luxembourg Company Safason Corporation SPF S.A. and Inrow Corporation. He also has luxury homes in Central London. Mian Muhammad Nawaz Sharif (25 December 1949) is a Pakistani businessman and politician who served for three non-consecutive terms as the Prime Minister of Pakistan, and for two terms as the Chief Minister of Punjab.

Nawaz Sharif is one of the richest men in Pakistan, amassing a wealth of over Rs. 1.6 Billion.

Sharif was sentenced 10 years in prison and £8 Million after he and his family came under judicial scrutiny due to being involved in Panama case of offshore companies.

Due to these and many other reasons he has claimed a spot at number 2 in the list of top 10 most corrupt politicians of the world. Vladimir Vladimirovich Putin (7 October 1952) is a Russian politician and former intelligence officer serving as President of Russia since 2012, previously holding the position from 2000 until 2008.

Putin made it to number one on our list of top 10 most corrupt politicians due to various reasons,

him being the president of one of the big powers of the world and being involved in various corruption acts such as billions of dollars of untaxed revenue,

hundreds of offshore bank accounts, billionaires friends of Putin and many other corruption scandals.

But due to Putin’s high position and strong network he is still unaccounted for and free to hold position as the president.