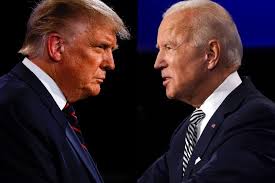 Why did Donald Trump lose the 2020 elections, or did he really lose, considering the narrow margin of difference between him and Biden?
After winning the presidential election in 2016 it was soon realized, that he was not the one to act and run according to the rules set by the establishment. He was a rebel with no cause and wanted to run the presidency according to his own terms.
His witchhunt against Joe Biden and his son in Ukraine lasted many years with no conclusive results, on the contrary, his actions were detrimental to him and beneficial to Biden, in the long run.
His complete U-turn on the Iran treaty and sanctions thereafter was seen as childish and erratic behavior by EU countries which were the guarantors of the treaty. EU lost its trust in Trump and remained nonchalant towards him, throughout his remaining terms.
The only thing favoring his term was that he did not start any war, and was bent around bringing the troops back from Afghanistan.
After the election, Donald Trump has indicated that he will not peacefully clear the way for the next administration, which would lead to large unrest and possibly civil riots across America. Betrayal from Israel which quickly shifted towards Biden, even after agreeing to all the terms laid out by Israel to attack Iran, and foment war between Saudi Arabia and Iran, which was thwarted by Pakistan when it refused its air bases to be used as launching pad for the US Airforce to strike into Iran.
US forces were geared up to attack Iran after the death of Qasim Sulaimani, but the complete refusal by the Pakistan army and the Govt. made it impossible for the US forces to launch an attack on Iran.
Donald Trump’s failure to convince the Pakistani administration was not well taken by the US military establishment.
Failure of the Israeli plan led to the ouster of Donald Trump as he had lost the favor of the Jewish community and Israel. AIPAC fully stood behind Joe Biden who himself being a jew was favored against Donald Trump.
He was favoring peace against any new war was not what was the agenda of US establishment. His refusal to pin MBS of Saudi Arabia for Jamal Khashoggi murder even though the complete file of MBS involvement was in the hands of the CIA. Trump simply refused to comply with his own establishment request.
Donald Trump even ignored India plea not to pull out of Afghanistan was ignored leaving the Taliban in charge of its own affairs in their country.
it is not to be forgotten that under Obama war in Yemen, Syria, and Iraq were initiated, and on the behest of Israel ravages of war on Islamic countries were waged.

It is a common perception that after assuming the office Joe Biden will pick up the pieces from where he left off. He has even warned MBS that Saudi Arabia and its rulers would be punished for the crimes they have committed. He is critical of Indian behavior towards the valley of Kashmir, but all this is to be taken with a pinch of salt as his two faces are known to all. His affinity to Israel and its policy will pay off sooner than expected.

On the other hand, China and Russia have reserved their comments and congratulatory notes towards Biden as they expect Donald Trump to contest the results and lead the open protests against the perceived stolen elections.

Things are dicey at the moment with uncertainty looming on the horizon, its only a matter of time to comprehend the true outcome of 2020 US election.