Pakistan Super League  Schedule 2020 is declared and as per the PSL schedule 2020 first match will be played between the leading champion Quetta Gladiators vs Islamabad United on 20th February 2020. The match location is National Stadium Karachi and will be broadcast live on PTV Sports.

It may be probable that you want to get the schedule of each PSL team franchise separately. Then, you don’t need to go anywhere else because we have made it possible here.

Let talk over the PSL Schedule 2020 of each team! 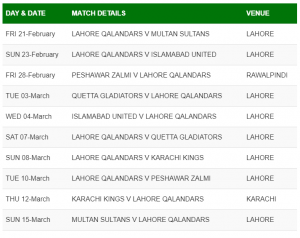 The Costly team in the Pakistan Super League is Lahore Qalandars. So, Lahore is the capital of Punjab province and it is the prosperous city in Pakistan. Also, the PCB officials chose a cricket location in this city, which has a capability of 27,000 peoples. 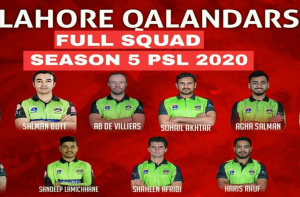 Moreover, the owner of this team has elected excellent players to play the cricket competition of this fifth season. The PSL schedule 2020 of Lahore Qalandars is available below! 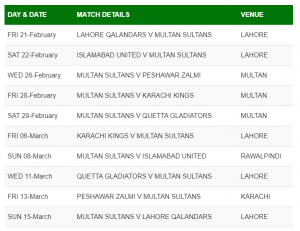 The most desired team in the PSL is Multan Sultans. Multan is the seventh-largest city in Pakistan and located on the bank of River Chenab. Also, the PCB selected the Multan Cricket Stadium (MCS) as one of the PSL location. MCS is also the home ground of the Multan Sultan. This stadium is newly refurbished and now has a capacity of 35,000 spectators. 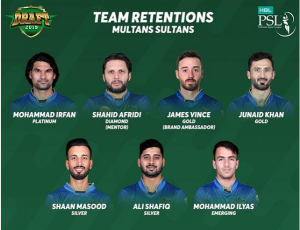 Furthermore, the owners of this team have selected the T20 specialist players in the world. This team may win the PSL 2020. The PSL schedule 2020 of Multan Sultans is present below! 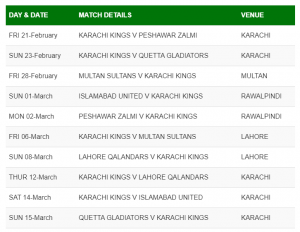 The weird franchise in Pakistan Super League is Karachi Kings. Also, Karachi is the capital of the province of Sindh. It is the most crowded city in Pakistan and 5th crowded city in the world. Also, PCB officials have selected the National Stadium Karachi to play the cricket of PSL 2020, which has a capability of 34,228. 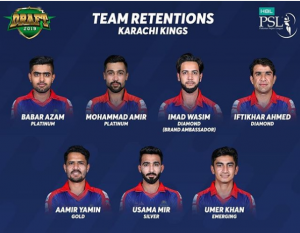 Moreover, the owner of this outstanding team chosen the brilliant and highly skilled national and international players. The PSL 2020 schedule of Karachi Kings is mentioned below! 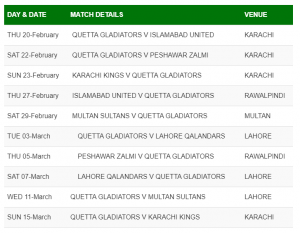 The well-known and unique team in the PSL is Quetta Gladiators. So, the home city of this team is Quetta, which is the capital of the province Baluchistan. The cricket fans and cricketers will go to auditorium cities to watch and play cricket. 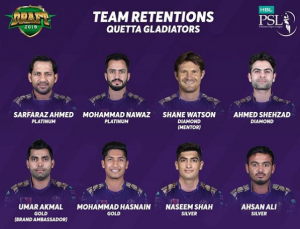 Additionally, the owner of this team acquired the unique players to play the cricket matches of this league. So, the PSL  schedule 2020 of Quetta Gladiators is present below! 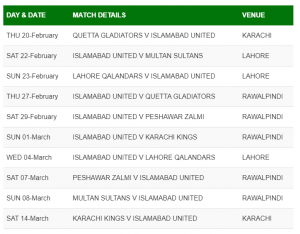 The exceptional team in Pakistan Super League is Islamabad United. It belongs to Islamabad, which is the capital of Pakistan. In this city, hundreds of cricket clubs are existent for learning. So the home ground of this team is Rawalpindi Cricket stadium and has a 28,000 capability. 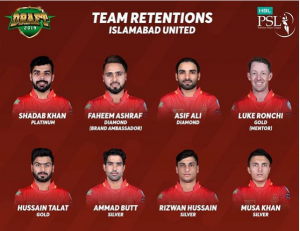 Moreover, the owner of this team picked up the expensive international cricketers to play PSL 5. The PSL  schedule 2020 of Islamabad United is available below! 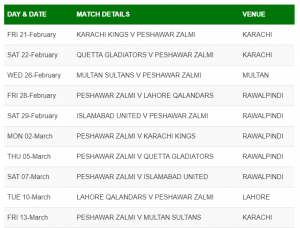 In the PSL, Peshawar Zalmi is the most prominent and exclusive team. It is named after Peshawar, the capital city of Khyber Pakhtunkhwa province of Pakistan. Also, it is the only team that has given brilliant cricketers to the Pakistan Cricket team. 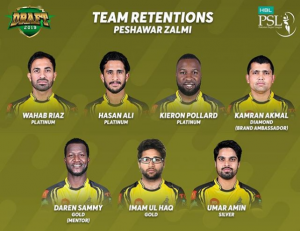 So, the owner of this excellent team selected the very experienced players to play PSL 5. The PSL  schedule 2020 of the Peshawar Zalmi is present below!

Well we discussed the PSL schedule of all the teams in the above section. So, if you are an enthusiast of any team, then you must watch the live T20 performance of your favorite team. For this purpose, you should book the tickets and get ready for the cricket extravaganza.

Did you know it About the Winners of the Last 4 Seasons?

The 1st  edition of the Pakistan Super League was played in the UAE. So, the PSL 1 final match played between the Islamabad United and Quetta Gladiators on 23rd February 2016. Islamabad beaten the Quetta and won the prize as the winner of PSL 2016.

The 2nd  edition final of the PSL played in Gaddafi Stadium Lahore, Pakistan. Peshawar Zalmi and Quetta Gladiators showed entertaining cricket. They played the final match of the PSL 2 on 5th March 2017. So, Peshawar Zalmi won the final competition and got the award as the second season winner PSL 2017.

What is the time of the PSL 2020 Opening Ceremony?

As per reports, Opening Ceremony of the 5th season of PSL will be held at National Stadium Karachi on 20th February 2020 and celebrities including Akon, Ali Azmat and Salman Ahmed of Junoon, Ali Zafar, etc, are likely to perform. Opening Ceremony will start at 5 pm, so people are advised to reach the venue before 3 pm to avoid any long queues or rush hour.

Where will the PSL Final take place?

The final cricket match of the PSL 2020 will take place in Gaddafi Stadium Lahore. The final cricket competition will bring a lot of enjoyment and entertainment for cricket lovers. Therefore, you should watch the live last match at the venue. The retailing shops are available in Lahore, for booking of the tickets.

What is the name of the sixth team in PSL?

What time is the PSL final?

PSL 2020 final will be a night match and expected to start after 7 pm.

How many Overs are in PSL?

A total of 34 games are planned for PSL 5 including the Final on 22nd March 2020 Gaddafi Stadium, Lahore.

What does the PSL stands for?

PSL stands for the Pakistan Super League, which is one of the best T20 leagues in the world. Also, PSL has six teams like other leagues over the globe.

Is PSL a successful Twenty20 league?

Yes, it has become the most wanted and famous T20 league in the world. Even international players like to play in this league. Around 436 foreign players showed their interest in playing Pakistan Super League 2020.

Consequently, I have mentioned the PSL Schedule 2020 . Also, you have read the PSL schedule 2020 by teams separately. So, you should go to the stadium to enjoy the PSL 2020. If you need more details related to Pakistan Super League 5, then you can reply through the comment section. Therefore, keep visiting this site for more information. Thanks!