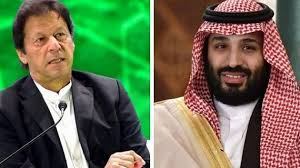 In his recent interview, the Pakistani Prime minister answering a question regarding recognition of the state of Israel accepted that his government was being pressurized to recognize Israel or face consequences.

The offer was sugar-coated with incentives as well as carried strict punitive action if not complied. By recognizing Israel aid from US would resume amounting to billions of dollars, loans of the world bank would be written off, Pakistan would be removed from FATF grey list, assistance in agriculture technology, as well as other energy projects including Oil Refinery in Gwadar with Saudi assistance, shall be established.

America would assist Pakistan to move away from China by slowing CPEC project and returning the $35 billion to China. In short, it was an attempt to sabotage the Pak China relationship making Pakistan abandon China and move towards the Ameican camp. But Once bitten twice shy Pakistan understood the game played at its expense.

Imran Khan categorically stated that he would adhere to the principles laid by the Founder of Pakistan Mohamad Ali Jinnah that Pakistan will not recognize Israel until and unless the Palestinian issue is resolved according to the aspirations of Palestinian people. The west and all others have been clearly made to understand this principle and no compromise shall be made on this issue.

The number one country to pressurize Pakistan in this regard has been the kingdom of Saudi Arabia, specifically the crown prince Mohamad Bin Salman. which pressurized the UAE, Bahrain, and Qatar to do the same. Exercising its influence thru OIC, MBS wanted to remove the obstacle it faced from Pakistan. If Pakistan agrees to recognize Israel, it would be relatively easy for Saudi Arabia to Officially recognize Israel. It already has developed a relationship with Israel officially with consulates being opened in Tel Aviv and Jeddah, only formal announcement is being awaited.

MBS through instruction from Israel thwarted the Islamic Summit of Kaulalampur hosted by Mahatir Mohamad with a fear that if a new Islamic block were to come into existence, OIC would lose its importance and become defunct with Saudi Arabia as the biggest loser. Pakistan was threatened that millions of workers would be expatriated and Pakistan will face a severe financial crisis as a consequence. Saudis were blackmailing Pakistan, later asking for a return of $3 Billion, and discontinuation of oil supply on a preferential basis. Thanks to financial support from China and assurance from Azerbaijan to supply oil for the next ten years, Pakistan averted this blackmail but yet failed to attend the Malaysian summit. Tayab Erdogan was vocal and exposed MBS tactics.

MBS with that backing of his friend Donald Trump was flying high without giving a single thought to the outcome. Becoming the puppet of Israel and sitting on it lap the move by MBS was soon to misfire. Here we have to appreciate the stand taken by King Salman who resisted his son’s folly, by not falling into the trap of Israel.

With Biden winning the American elections the dynamics have changed and the invasion of Pakistan through India has been put on hold.

Mossad has been secretly visiting UAE Saudi Arabia and Qatar as an exploratory visit, and even requested Pakistani establishment to visit Pakistan which was flatly refused with no recourse. This infuriated Israel which started pressurizing Saudi Arabia to pressurize Pakistan to comply or face consequences. Pakistan has moved away from Saudi Arabia as a result of its arm twisting tactics.

Saudi Arabia has proven not to be a friend of Pakistan and will soon face the music of its hypocritic behavior and backstabbing a true friend.