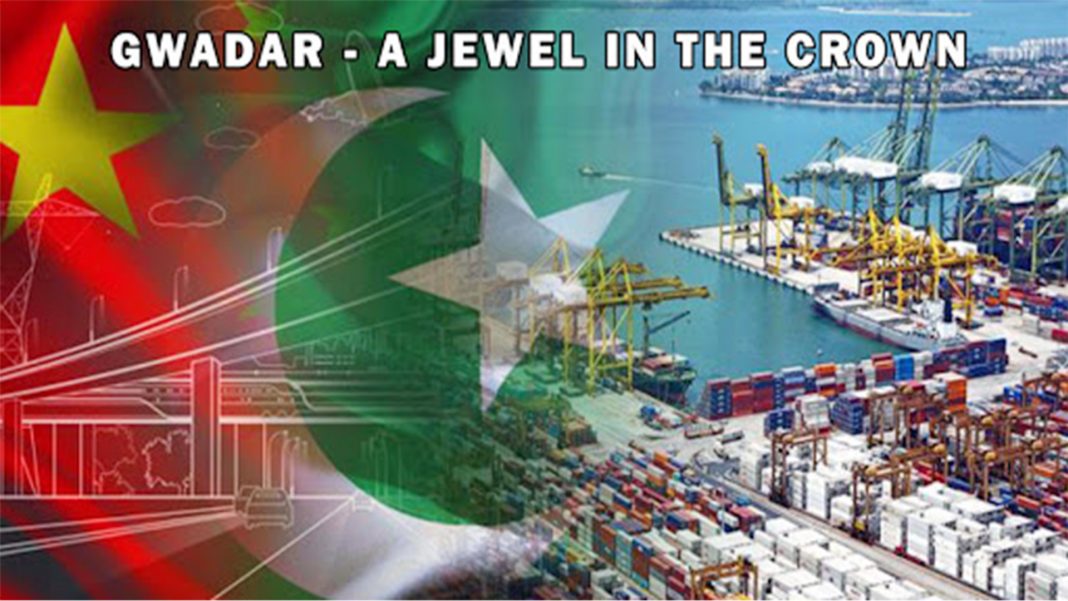 Rarely, your strength becomes a weakness, same is the case with Gwadar. The game-changer is not being digested by those who want to eye us just like a third world nation. Gwadar is single due to its geo-strategic location, socioeconomic-depth and a harbinger of prosperity. The port is deeper and the region is the fertilizer than the UAE and Chahbahar with a strong geopolitical and geostrategic location which centres the world .

A judicious choice of Chinese to make it focal terminal of One Belt One Road initiative to rule the world economy. Its dream of becoming the leader of the world’s economy by lowering the productive- input and cutting short of the long logistic rout is only possible through Gwadar. Chahbahar port can augment the Gwadar port but can never be an alternative of cost-efficient smart Gwadar seaport due to its depth, cargo handling capacity and geographic location.

Join SocioON to connect with Gwadar Coummunity and others in your Social Circle gwadarsocial.socioon.com.

However, Jable Ali port is a competitor and rightly feeling a threat from it. This port is also a lifeline for landlocked Afghanistan and CARs. This is the port for which a superpower got into pieces-simple enough to understand the whole myth. After spending a lot of time in Gwadar, I had to witness its potentials and issues closely, both at the micro and macro levels with the possible solutions.

If you eye the region with a tourist and aesthetic taste, the marine life, green turtles, tropical climate, vegetative capacity, golden virgin beaches and land escape can fascinate everyone. Kund Malir, Oarmara, Pasni , West bay Gwadar, Land escape starting from Pishukan to Gunz , Daran and Jewani have the greatest natural pull. From Pishukan to Gunz you feel like moving in sweet dreams. If someone visits Gwadar and does not watch the enchanting and awesome beauty of sinking sun into the Arabian ocean, the visit of Gwadar does not complete.

Gwadar a land full of golden water, now digitalizes through SocioOn Pakistan’s First National Social Media where Gwadar’s people will connect with each other on their own community based !

This iconic daily activity never stops you from the reoccurring visits. The ever-changing multi-shades of clear-sea-water, due to optical illusion, will invite you to say “Subhan Allah “. This relax-small-town sleeps early after evening except the newly developed Cornish which may keep you engage with its romance till mid might. The lunar-apex creates a turmoil not only in the sea but also in your emotions. Never miss its prawns, surami fish and pamphlets. Let me admit the city is most secured of all with generally friendly people. DG, Gwadar Mr Shazeb Kakar also revealed a security-fence to cordon the city was just to be initiated.

The partial shifting of provincial-capital from Quetta to Gwadar also does not look too far. Its gonna be a great tourist area for the Gulf-countries, Iran, Central States and China in the near future. After interviewing two dynamics young-men, Mr Babir Ali Kakar, DG, Baluchistan Coastal Development Authority and Mr Shahzeb Kakar,DG , Gwadar Development Authority, I got the satisfaction that the provincial Govt was quite determined to tab all potentials of the area.

If you ever been involve in import-export, you must know the minimum voyage time for a cargo container from Pakistan to Europe is 14 days,Gwadar port will cut short it by almost to half. Upcountry is almost connected to Gwadar by M-8 which will enable you to drive down to Gwadar in 14 hours from Lahore.

By using Gwadar port, you don’t need to use feeder vessels for third country’s mother vessel in Salala, Mandara, Colombo and Dubai. Only importers, exporters and economists know the value when your cargo reaches the destination in half of the time. A container from the Western part of China reaches Dubai in 26 days, whereas,it will be there in 6 days by using Gwadar port. The port has also announced a maximum demurrage grace period of 19 days. And if the product is also manufactured in Pakistan by using local raw material and cheaper labour you can imagine why China is dying for it. It holds seducing benefits for other trading countries as well. A low input ultimately reaches to end-consumers.

14 meters deep Gwadar port’s berths have already successfully handled the mother-vessels. Five operational berths of the port are ready to host the feeders and mother-vessels with an entail port capacity of 400 million metric tonnes annual cargo handling. The port is already in use for transit-shipments. Let the port link-road expressway complete in next year to start its regular commercial operation.

Apart from tourism and logistics, this area is full of the potentials for the education industry, health sector, to feed the gulf region, mining, livestock, steel and scrap, food and beverage, agriculture, oil and gas real estate and power generation. Govt has already announced Gwadar tax and duty-free zone. DG Gwadar, President, GCCI and director Baluchistan Investment Board, Mr Naveed Jaan Kalmati told that whole Gwadar district would soon be the duty and tax-free to support the national industrial sectors. The recent setting up of a one-window operation by the Baluchistan Govt to facilitate the investors is a very encouraging step. It was a real barrier and long-awaited step.

Nani Mender, situated at Kund Malir , midpoint of curly amazing coastal highway, is very significant religious place of Hindu community. Hinglaj Mata also known as Hinglaj Devi, Hingula Devi or Nani Devi, is one of the denomination of 51 Shakti Pettahs of Hindu Dharm, and only the second in Pakistan. The Devi has been resting in a mountain-cavern on the bank of the unknown-centuries old Hangul river. The land escape of the area is spectacular.

The present number of per annum 250000 Hindu religious tourists could easily be elevated to millions with no time by focusing on basic infrastructure. Here untiring and optimistic princesses of hope will also give you warm well come and hope that golden days are forthcoming. Why a PPP should not be developed with the devotees to elevate this area having great potential of economic activities.

But if everything is going fine with? Unfortunately, No! There are many bridges left to come across yet, leading people to in the state of hesitation. Let’s us discuss them one by one:

The author is a CPEC management consultant and Honorary Secretary, Gwadar Builders and Developers Association. However, his thoughts are purely personal and not an official narrative.