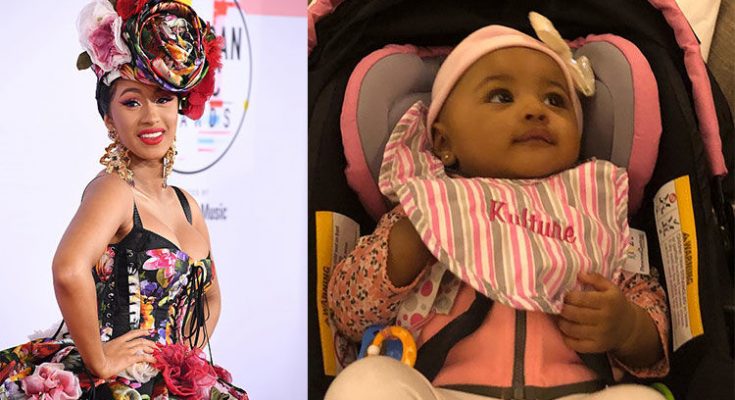 Finally Cardi B Shared Photo of Her First Child

After breaking up and splitting from her husband, who is her fellow rapper too, Cardi B shared the first picture of her baby girl named: Kulture Kiari. In no time the photo went viral around the internet and created much hype.

4 months old Baby’s name can be seen on her bib she’s wearing, sitting in the car seat and she’s wearing a pink headband with a white bow. In case you didn’t know Card B’s real name is Bellis Almanzar, titled the photo “My Heart.”

The photo went viral in no time and the post reached over 6 million likes in the last four hours. The baby was born on July 10th and is the first child of his 26th year’s old father named Kiari Kendrell Cephus. Last Tuesday Cardi B via her Instagram account posted about her breakup with the husband.

In a video message to her followers Cardi B described how things went flat between them saying “And it’s nobody’s fault, it’s just like I guess we grew out of love but we’re not together anymore.

I don’t know, it might take time to get a divorce and I’m going to always have a lot of love for him, because he is my daughter’s father, and, yeah.” Her ex-husband’s stage name is “Offset” and he’s a fellow rapper.