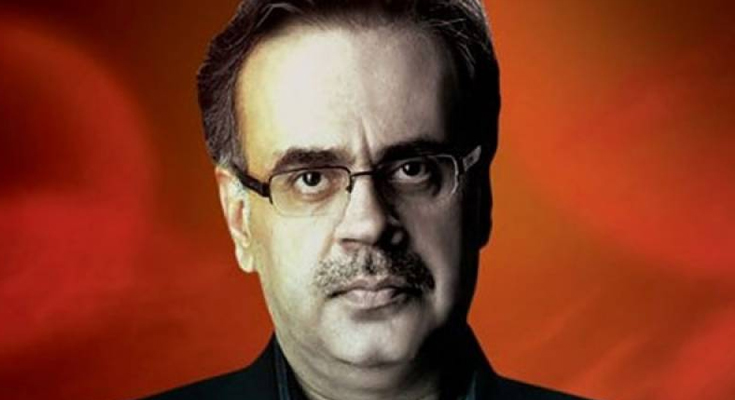 Shahid Masood is a Medical Doctor, Journalist, and Political Analyst. Dr. Shahid has worked with many News Channels such as Ary News, PTV, and News One etc. He is an excellent host and anchor. Meray Mutabiq was the well-known talk show of Shahid Masood. He was also the Managing Director and Chairman of Pakistan Television Corporation. Now he performs in a talk show Live with Dr.Shahid Masood as a Guests on News One.

In a 2004 interview to Arab News, Khan told that his father was a civil engineer in Saudi Arabia who worked there for 15 years and his mother is a teacher. He told that he is married and has two daughters.

According to Dr. Shahid Masood, he spent his childhood in Taif and Riyadh. For seven years, he has done schooling from Pakistan International School in Riyadh and two of his younger brothers were born in Saudi Arabia so the country is close to him.

Royal College of Surgeons of England

Dr. Shahid received a fellowship of Royal College of Surgeons of England. He is also a medical doctor by profession.

He has done his MBBS degree from Jinnah Sindh Medical University. Dr. Shahid did his major in International Relations and Defense Studies from the Fletcher School of Law and Diplomacy.

Khan became joined with the media in 2001. Khan, initially he worked as the Senior Executive Director of ARY Digital Network, where he has worked as the chief of ARY One World now known as ARY News and hosted the show Views on News.

In 2005, Dr. Shahid received a scholarship with CNN. He carried out coverage of the three wars in Afghanistan, Iraq, and Lebanon. In 2007, Dr. Shahid joined Geo TV as its Group Executive Director where he hosted the TV show Meray Mutabaq.

In June 2008, Dr. Shahid was appointed as the Chairman of Pakistan Television Corporation (PTV) with the additional charge of Managing Director at PTV on a two-year contract. Nevertheless, in November 2008 he resigned from his position as chairman and managing director of PTV. Following the resignation, he was selected as special assistant to the then Prime Minister of Pakistan Yousaf Raza Gillani with the status of a minister.

As per Daily Times, Dr. Shahid was asked to resign from PTV by the then President of Pakistan Asif Ali Zardari. According to Dawn, this came following mounting tensions between Dr. Shahid and the then Minister of Information Sherry Rehman when the former refused to take back deputy managing director PTV Shahid Nadeem and canceled his reinstatement orders.

Dr. Shahid also suspended PTV director administration and personnel and issued him a show-cause notice for complying with the prime minister’s orders and permitting Nadeem to rejoin the organization as deputy MD. Ministry of Information was also dissatisfied by the audit of PTV under his chairmanship and his decision to increase salaries of PTV staff at the time of a financial crisis.

Dr. Shahid was reportedly drawing a monthly salary of ₨ 850,000 and was appointed without a consultation with Minister of Information. Dr. Shahid was supposed to pay six months salary to PTV in case of resigning as per contract terms, which however was waived by the then prime minister.

The show was followed a similar pattern to his earlier current affairs and politics. Right before General Election 2013, Masood joined Royal News for the election coverage.

In December 2013, after that, he joined Jaag TV (formerly CNBC Pakistan) where he hosted his show Live with Dr. Shahid Masood.

In 2014, Dr. Shahid joined News One and started a show Live with Dr. Shahid Masood, as a guest journalist. Then it has been shifted to ARY News in February 2016, and then on Bol News from late 2016 till February 2017.

The show then returned again to News One on 14 February 2017.

Dr. Shahid also had presented religious documentary End of Time in 2004 from ARY One World, with sub-name called as The Hidden Truth. And then he refreshed and represented them as The Lost Chapters from News One in 2015, the Final Call from ARY News in 2016 and The Moment from News One in 2017.

In March 2016, Finance Minister of Pakistan Ishaq Dar sent a legal notice to Dr. Shahid for allegedly leveling baseless allegations in his TV programme and demanded that Masood offer an apology and pay ₨ 1 billion compensation.

In August 2016, PEMRA imposed a 45-day ban on his show airing on the ARY News after Masood alleged in a programme that the chief justice of Sindh High Court has taken a bribe and later did not fulfill his promises. Dr. Shahid was also banned from participating in any other TV show during this 45-day period.

In January 2017, Ishaq Dar again sent a legal notice but this to Bol News, demanding an apology for false and defamatory statements, aired in Dr. Shahid show on 24 January.

On 13 February 2017, PEMRA decided to ban his show for 30 days, and ₨ 1 million fine was charged on the channel for making baseless allegations against the federal ministers for finance and defense.

In March 2018, JIT declared that Dr. Shahid Masood’s report about Zainab murder case was false and baseless, for which he was banned for 3 months from hosting his TV show by the Supreme Court. He was resumed back hosting the show on 21 June 2018 on News One