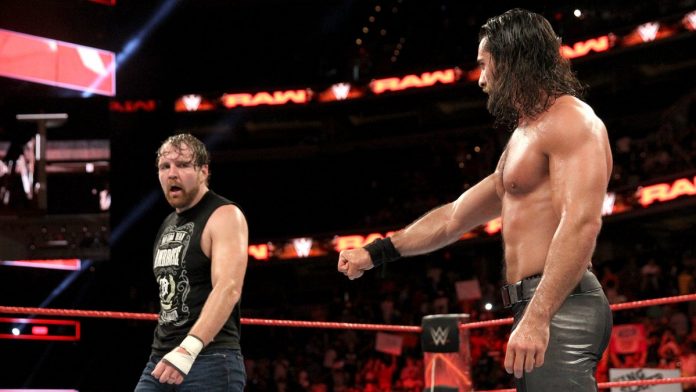 Last week, he decided that he needed to vaccinate himself to protect himself from the illnesses that the fans transmit. Now Dean Ambrose continued to drive the game.
On WWE Monday Night RAW, this week’s wrestling villain put on a gas mask and a six-man SWAT team also masked.
Ambrose who turned away from Seth Rollins following the cancerous affair of his partner Roman Reigns had blown up the group “the Shield” claiming he needed protection ahead of both Rollins and the Houston fans.
In more detail than before the “Lunatic Fringe” explained why he does not want to deal with Rollins and the audience anymore.

Ambrose explained that he had not changed, but Reigns and Rollins. He would never have cared for the spectators, the two of them that was their mistake.
He does not want to let strangers keep their cell phones in their faces to be available for photos to enhance the dull life of the fans.

Rollins is just like the fans emotionally needy and it makes him sick as Rollins and the fans would line up to make each other feel important.
Ambrose’s speech achieved the hoped for the effect the fans called for Rollins and he was rushed through the audience.

He fought his way through the SWAT (special weapons and tactics) team and eventually attacked Ambrose but turned the tide by slamming the approaching Rollins with his gas mask. In the end, he missed Rollins his Dirty Deeds finisher, once outside the ring, once in it. Ambrose once again towered over Rollins before the pair fought for Rollins’ Intercontinental Title on December 16 at TLC.